Raising Children in Sweden
5 things newcomer parents should think about

Most cultures continue on from one generation to the other by passing down ways and beliefs from parents to children. Since there exists so many different cultures in the world, views on raising children tend to also differ tremendously. This is apparent if you come from one cultural background and are raising your children in a different country and culture.

As an immigrant to Sweden, and the whole Nordic region myself, raising children here has given me a number of things to reflect upon. In this article, I will share my experience on being a foreign-born parent, and father, who is raising children in Sweden. 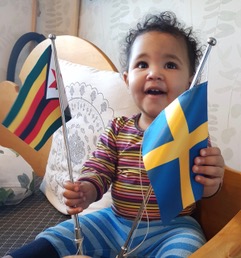 Six years ago, I moved from Zimbabwe to Sweden to live with my partner, who is Swedish. Our three children, aged five, three and one now, were all born in Sweden. My personal views on parenthood are inspired, partly, by my own childhood experiences. They are also inspired by views on parenthood shared in the Shona culture. So, what is it that parents who have just moved to Sweden should know concerning raising children in Sweden?

First and foremost, if you were hoping to raise your children exclusively according to the expectations of your foreign culture, you might be disappointed. The Swedish perspective on raising children might differ a lot from your culture. I won´t exactly say, “when in Rome, do as the Romans do”. However, living in Sweden usually means Swedish cultural influence on your children will be strong. The child-parent relationship in Sweden is guided by laws and regulations that stretch across different institutions. Below is a list of 5 things I think new -comer parents should know about as they settle or plan to settle in Sweden.

Not only is it wrong to spank, threaten, humiliate or use any kind of violence against children, it is also as a crime in Sweden, since 1979. While most countries  voice against corporal punishment, very few countries have made it unlawful.

This law affects anyone in Sweden, whether nationals or foreigners and whether it happens behind closed doors or in public. So if one comes from a culture that accepts spanking children, it is important to know that in Sweden, raising children this way is not an option. It shows that a parent has lost control. Alternative support mechanisms can be recommended to the offender. Social services can also step in and take measures deemed appropriate.  In 2017, Sweden made a proposal to incorporate the convention of the rights of the child into Swedish law.

All children, from pre-school age in Sweden, are groomed to understand what democracy is. They are taught to express their thoughts and opinions and to participate actively in deciding on whatever concerns them. If, like me, you grew up not used to opposing your parents´ will, you might mistake these values for rebelliousness and disobedience. While still new here, I was conscious of Swedish children saying, “jag vill inte!” (I don’t want to) a lot. I remember wondering where exactly Swedish parents drew the line between their will and the child´s will.

School plays an important role in promoting the Swedish cultural values. You can read more about the Swedish school system here. Considering how many hours are spent at school, these values become part of the child´s personality. Consequently, a home with less tolerance for these values may create confusion and conflict both within the child and between the child and parents.

Sweden is considered a great place to raise kids. Institutions like Försäkringskassan, make it possible for parents to spend more time with their children. Both parents are expected to actively take part in raising children. This includes taking time off from work to take care of a sick child (VAB) or to go on paid parental leave. Parents can share days or transfer them to each other. There are, however, certain regulations based on the child´s age and limits to transferrable days, that ensure both parents have a chance at childcare.

So, what is there for parents to do while on parental leave? Depending on your location, which season it is and your child´s age, there are a number of activities to do. There is usually information available on most municipality (kommun) or county council (landstinget) homepages. Many churches in Sweden also do non-denominational activities open for all families. Since children aged six or older are usually in compulsory school, parental leave is most common with younger kids. If you are like me, a dad coming from a patriarchal culture where mostly the mothers do the day to day childcare of feeding and changing, Sweden will challenge you. Even men´s toilets have baby changing tables.

If English is the language you intend to use with your children, big cities might be a better living option than small ones. My experience in Lycksele, where I moved to and still live, has taught me this. Most Swedes in my city are reluctant to use English. This includes the teachers at the day care where my children go. Children are entitled to mother tongue teaching,  if there are at least 5 with that language. In Lycksele, it´s mostly Arabic, Somali, Kurdish, Persian or Tigrinya. Every child at daycare is also entitled to mother tongue support no-matter which mother tongue they speak. Having taken it for granted that English usage is no big deal for most professionals in Sweden, I was surprised by the day care´s response, when I asked for English support for my kids. They were not in any position to do so. Presently, with limited English outside our home, my children´s multi-linguism is rather impeded in our part of the country.

Sweden is fundamentally a Christian country and acknowledges Christian holidays on the calendar. If you come from a different religious background, with a different calendar, you might find yourself having to make painful adjustments. One example is the difficulty in getting children out of school on days that you honour festivals or traditions associated with your culture or religion.

While being Christian, Sweden also “worships” scientific logic. In Shona culture, like many African cultures, superstition and the supernatural have a solid place in reality. Parents teach life-lessons to children through superstition. In the Swedish context this is can be challenged as “unscientific”. I will explore this topic further in a future post.

These were just 5 of the few things I had to share. Your feedback – questions, comments and opinions, is welcome. Till next time. Cheers from up north.